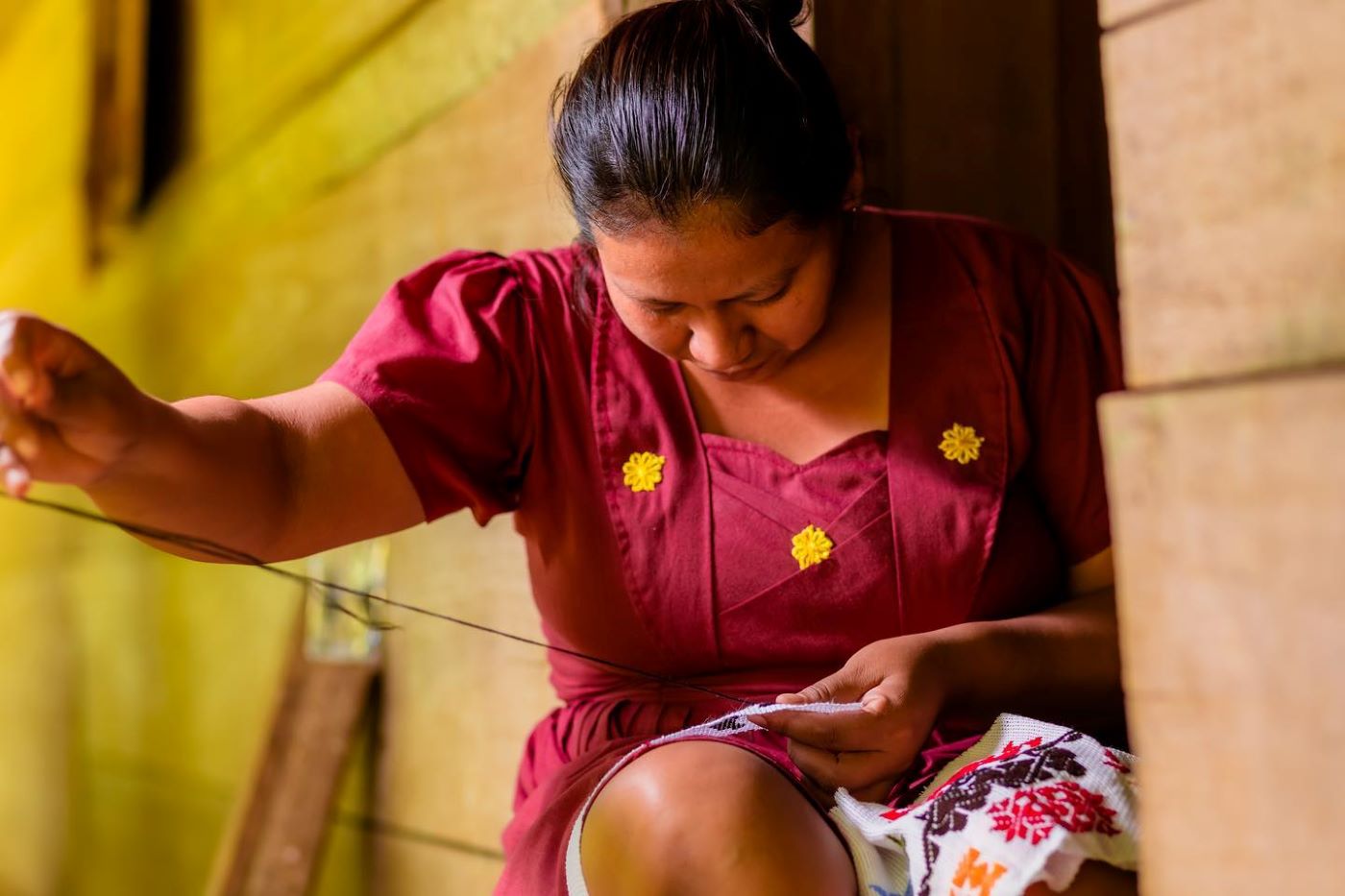 A unique, centuries old Mayan artform once thought to be dying, is enjoying a glorious renaissance in Belize. More importantly, it is emerging as a launch pad for many indigenous women to lift themselves out of poverty.

The resurgence of intricate Mayan embroidery is evident on websites of online giants such as Etsy and in high-priced boutiques in North America and Europe. Additionally, key public figures in Belize and influencers are proudly promoting clothing that features the handmade artwork.

Unfortunately, the indigenous women who spend weeks and sometimes months crafting these complex designs, do not always reap the ultimate value of their artistic expression.

That scenario, however, is changing due to financial support from the Caribbean Development Bank (CDB) for the hugely successful Fahina project of the Sarstoon-Temash Institute for Indigenous Management (SATIIM).

The initiative, which was first spearheaded by Belizean intellectual Froyla Tzalam, was the beneficiary of a US$130, 000 grant under the Bank’s Cultural and Creative Industries Innovation Fund (CIIF).

Tzalam, a highly respected anthropologist and advocate for indigenous people, was elevated to position of Governor General in May 2021 but her work has been continued by Maya Choc, the new Executive Director of SATIIM.

Faced with obstacles such as poverty, limited educational access and employment opportunities, the Mayan women, through Fahina are now benefiting from consistent and sustainable income, while boosting their economic independence.

With the assistance of a consultant and basic training in entrepreneurship, marketing, intellectual property, and the manufacturing processes for various types of apparel, these women are now empowered to dream big.

“Through this project we’ve found there was a need to assist the women with pricing these things. They were also underselling, and this embroidery can take sometimes up to two weeks or a month  to produce,” Choc explained.

The SATIIM executive director noted: “In addition to pricing, we also helped them with valuing their time and expertise. The intellectual property component sought to sensitise them about how valuable their work is because these are Mayan traditional practices. Often, foreigners come, and our women share our knowledge. We tell them how we do this, and they replicate it on a commercial level and sell it at a very high price.

“We tend to give out information and we are naïve about what people use it for.”

Emphasis was placed on capacity building for the 50 women participants, many of whom are from districts in Toledo.

“A simple system was developed that they can adhere to because often people put sophisticated systems in place and then they are not suitable for the people they are meant to assist. Most of these women have only gone to primary school,” the executive director revealed.

“Of all the indigenous groups, we are the most marginalised in the country. Mayan women, on whom this project is focused, we are at the bottom. . . . there is not even data on Mayan women and that shows how we are viewed and our place in society,” she reflected.

At the same time, Choc highlighted the importance of the project to sustaining the artform, empowering the Mayan women financially, and boosting their self-esteem.

Through the CIIF funded project, the group engaged the services of a designer who worked with the women to create popular, chic fashions into which the Mayan embroidery is incorporated.

So successful has the project been that senior government officials and average citizens are wearing the Mayan embroidery designs with pride. The act not only supports the resurgence of the artform, but uplifts the Mayan women and contributes to their economic and social wellbeing.

There is none prouder of the indigenous women’s work than Governor General Froyla Tzalam, who in her official portrait, wears the some of the traditional embroidery.

“Between October 2021 when we launched and December, it has been quite busy. We did not expect this kind of excitement about the project. . . . People really love that they are supporting these groups when they purchase these clothes.

“Since we have launched, those women have not had any free time. . . . It is a real success story, and we must thank the CDB for providing us with the support,” Choc gushed.

In addition to the embroidery, several Mayan women from nearby communities have been trained and employed to sew. For most of them it is their first foray into the formal workforce.

“What we also enjoyed was the fact that all the consultants working on the project were women, and that was special for us,” Choc affirmed.