Disaster prevention and preparedness
Other Multisector
Published on
Oct 18, 2019

The European Investment Bank (EIB) and the Caribbean Development Bank (CDB) have signed a new agreement to deliver better support for climate resilient projects across the region. The new Procurement Procedural Framework, will help the EIB and CDB to improve project implementation and monitoring, leading to more efficient financing for a range of climate focused investments in the Caribbean.

The initiative aligns with the continuous efforts of both banks to promote harmonization and aid effectiveness, as well as their commitment to supporting mutual reliance, streamlining procurement activities for promoters and recipients and increasing the resource efficiency of multilateral development banks’ (MDBs) procurement monitoring. 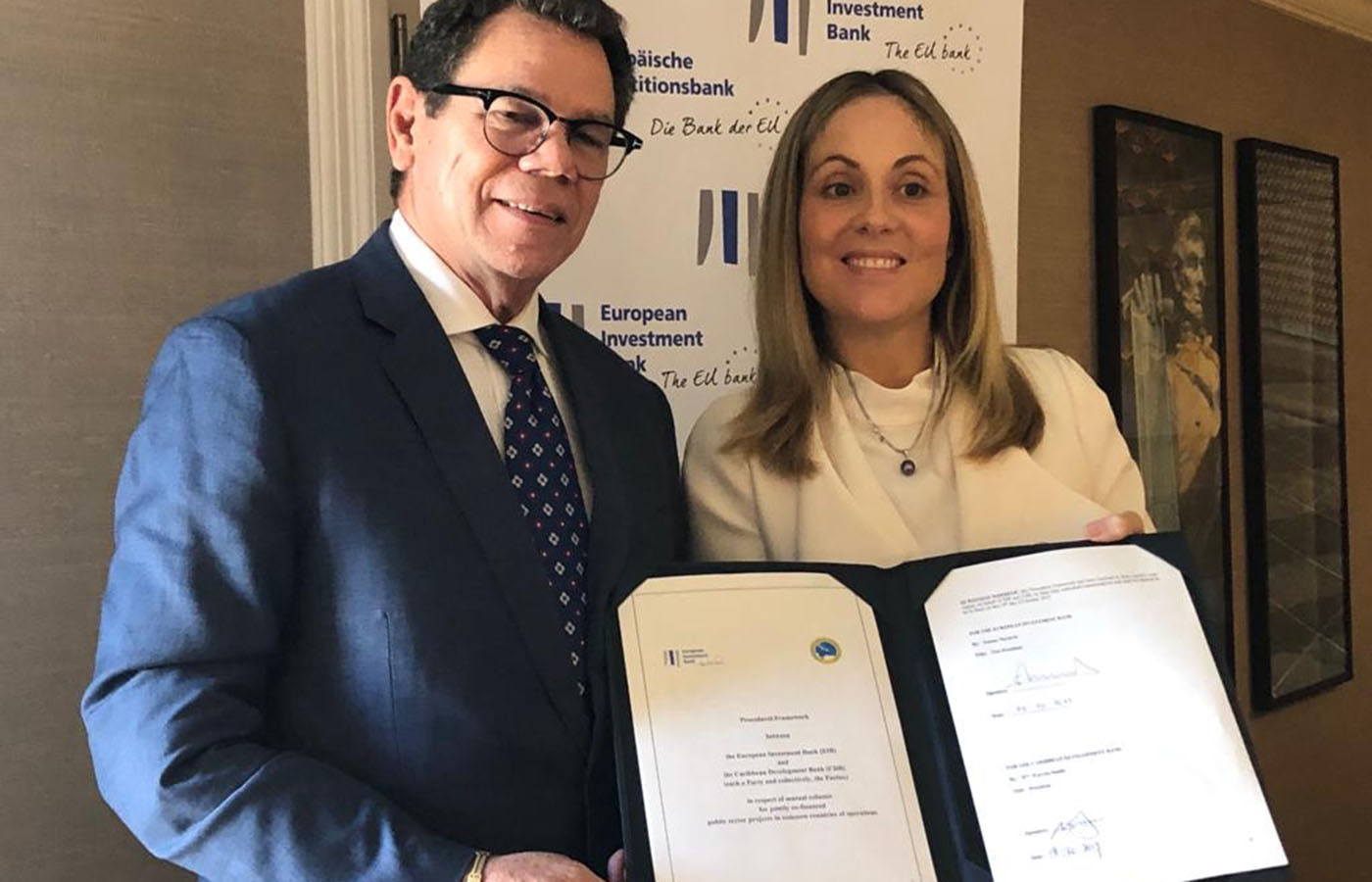 The new Framework, was signed during a bilateral meeting between EIB Vice-President, Emma Navarro and CDB President, Dr. William Warren Smith, on the margins of the World Bank/IMF meetings in Washington.

Speaking at the signature event in Washington, EIB Vice-President, Emma Navarro said: “Small island states are particularly vulnerable to the effects of climate change and access to finance to support public sector initiatives in this area is critical. The new agreement today will help the EIB and CDB to improve project implementation and monitoring, leading to more efficient support for climate adaptation and resilience projects in the Caribbean. This new step in the long-term partnership with CDB confirms our commitment to delivering efficient finance for projects in the region.”

CDB President, Dr. William Warren Smith said: “Reaching agreement on a common procurement approach is one of the most common challenges we face when we co-finance projects with other institutions. This agreement removes this risk for projects being jointly financed by CDB and EIB, and will provide for more efficient project appraisal and project execution. The agreement is also timely, coming on the eve of the rollout, by CDB of a new procurement policy and procedures. With effect from November 2019, the new policy and procedures will be applied to new projects being financed by CDB.”

This approach not only allows for a better division of labour between financiers, it also increases coherence and development impact of jointly co-financed operations, whilst avoiding the parallel application of EIB and CDB rules and inconsistencies when working on a common project.

This agreement will allow the two institutions to delegate to each other procurement arrangements and monitoring in relation with jointly co-financed projects, therefore reducing the costs on Promoters and strengthening partnerships.

The EIB has supported development and economic activity in the Caribbean with loans and equity investment worth EUR 1.8 billion. Since 2011, it has provided EUR 170 million of concessional funding to CDB to support climate action projects in the region. Investments financed include energy efficiency, solar power, security of water supply, flood prevention and post-hurricane reconstruction projects.