Old Harbour Primary School gets off to a flying start 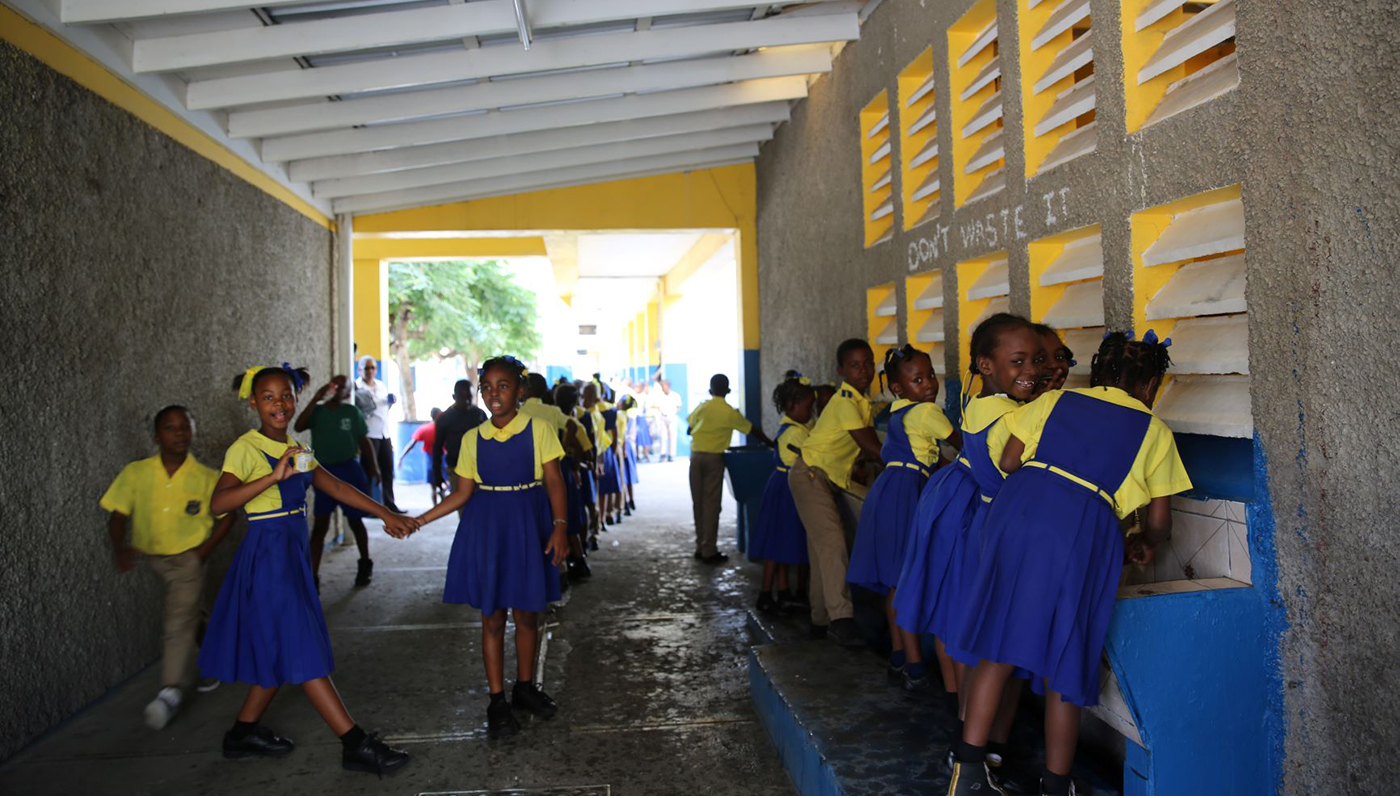 Three years after removing the shift system, the Old Harbour Primary School in St. Catherine, Jamaica is seeing positive results across the board. It has proven to be a turning point in the life of the institution, so much so, that the inspection rating undertaken by the National Education Inspectorate, an independent government body, improved from unsatisfactory in 2012 to satisfactory in 2018.

“For the last three years, the school has improved in all subject areas,” Principal George Goode says, noting a 16% increase in passes for subjects such as mathematics.

Established in the 18th century, Old Harbour Primary School is one of the oldest schools in Jamaica and the first one to be established in the town. The school changed its location in 2000 to facilitate more students, as it was bursting at the seams. But even after the move, the number of classrooms was not sufficient to provide a full school programme to students: 1,600 to 1,800 students were taught on shifts, while teachers had to handle 60 students, on an average.

Principal George Goode recalls that during the two-shift system some parents would drop off students on the afternoon shift from as early as 7 a.m., five hours before they were due to be at school. Conversely, students from the morning shift would hang around until late evening when they could be picked up; this created a disturbance for the other students in class and there were also the attendant risks of leaving children in an unsupervised situation.

The elimination of the shift system was made possible through an almost US$0.5 million grant from the Basic Needs Trust Fund – a sub-programme of the Caribbean Development Bank’s (CDB) Special Development Fund – for the construction of a new 10-classroom block in 2016 and introduction of several social programmes.

Generally renovated and painted, the school became disabled-friendly by installing wheelchair ramps and rails. Both the canteen operations and garbage disposal were improved, as well as bathroom facilities for teachers and students. The project also provided training in sanitation and hygiene and helped with the literacy programme, equipping the school with laptop computers, books, and a projector.

Operations Officer at CDB, Karl Pivott, says the improvement at the school was not only geared at assisting the Government of Jamaica’s policy to eliminate the shift system, but also targeted at poverty reduction in line with the Bank’s strategy.

“We, at CDB, think this money is well spent, as the improvements to the school are benefiting students from vulnerable communities,” Pivott says. “The improved academic performance and the greater focus on extracurricular activities, shows the impact that adequate learning space has on the students.”

The end of the shift system increased the contact hours from five to seven with teachers, while teacher to student ratio went down to one to 34. “Even though we don’t have the ideal situation, the change in the school from unsatisfactory to satisfactory, the results moving up, give the teachers that level of satisfaction and encouragement to push a little harder,” Goode points out.

However, academic improvement is not the only offshoot, the project has. “School is not just about the academics. The shift system also impacted the social programmes, such as clubs and societies that are used for the development of the students, and the improvement of their life skills, and to unearth the talents within them,” the principal says.

The school now boasts 15-20 clubs and societies compared with five beforehand. One of them, the Red Cross Club, offers support to the Mustard Seed Home for children with disabilities by donating canned goods and toys garnered through collection drives.

Poverty and violence are two stumbling blocks that the school is facing in the development of its students. Many of the students come from poor communities with one in three students are on the Programme for Enhancement through Health and Education that provides cash transfer to poor families. Many students also show behavioural challenges.

The school organised empowerment sessions with stakeholder groups such as the Child Protection and Family Services Agency, the National Parenting Support Commission and parents. As part of the project, teachers were trained in special needs education and a ‘Break the silence campaign’ taught teachers how to identify signs of abuse and encouraged students to talk about this severe issue. As a result, more and more students are now willing to break the silence about being abused.

“CDB and JSIF [Jamaica Social Investment Fund, which executed the project] did not just come here to institute a building but facilitate programmes that have been very impactful and far-reaching,” says Principal Goode.

In physical education, the school harvests its new potential, having produced the island’s top 100-metre (class three) high-school athlete, Christopher Scott. When the one shift system was introduced, he was able to train much longer, and was eventually discovered at the National Primary School Athletic Championships. In turn, he assisted in the unveiling of Usain Bolt’s statue in Kingston in July 2017 at the invitation of the Hon. Olivia Grange, Minister of Culture, Gender, Entertainment and Sports.