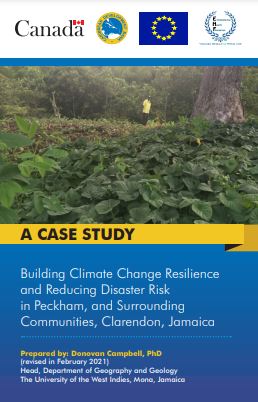 Agriculture plays an important role in Jamaica as it presently employs 19 percent of the country’s population and contributes 7.3 percent to its GDP (Planning Institute of Jamaica 2018). Despite the many benefits associated with agriculture, weather related disasters have had negative effects on the Jamaican society.  To further compound this matter, there is scientific consensus of increased storms and wet conditions (Taylor et al. 2018) as well as stronger drought periods and climate variability in the Caribbean region (Herrera & Ault, 2017).

Over USD 129 billion has been spent regarding weather related damages, according to the climate studies Group, Mona (2012). Such damages have been as a result of floods, hurricanes, droughts and tropical storms. Cumulatively, these weather-related damages have had negative effects on islandwide livelihoods and economic growth. This has serious implications for poverty reduction, food security, rural development and eco-system resilience.

In Jamaica, land is mainly used for agricultural purposes, thus climate related changes all pose continuous threats to livelihoods across the island. It has also resulted in devastating losses of agricultural produce and degraded farmlands.

Against this backdrop, key lessons from the “Building Resilience and Adaptation to Climate Change while Reducing Disaster Risk in Peckham, Clarendon and Surrounding Communities” project have been summarised in this case study. The project which was funded by the Caribbean Development Bank’s Community Disaster Risk Reduction Fund (CDRRF) was implemented by the Environmental Health Foundation (EHF). This case study will highlight the role of community engagement in the project’s success; its achievements and impacts on the community and best practices that similar initiatives can build on.