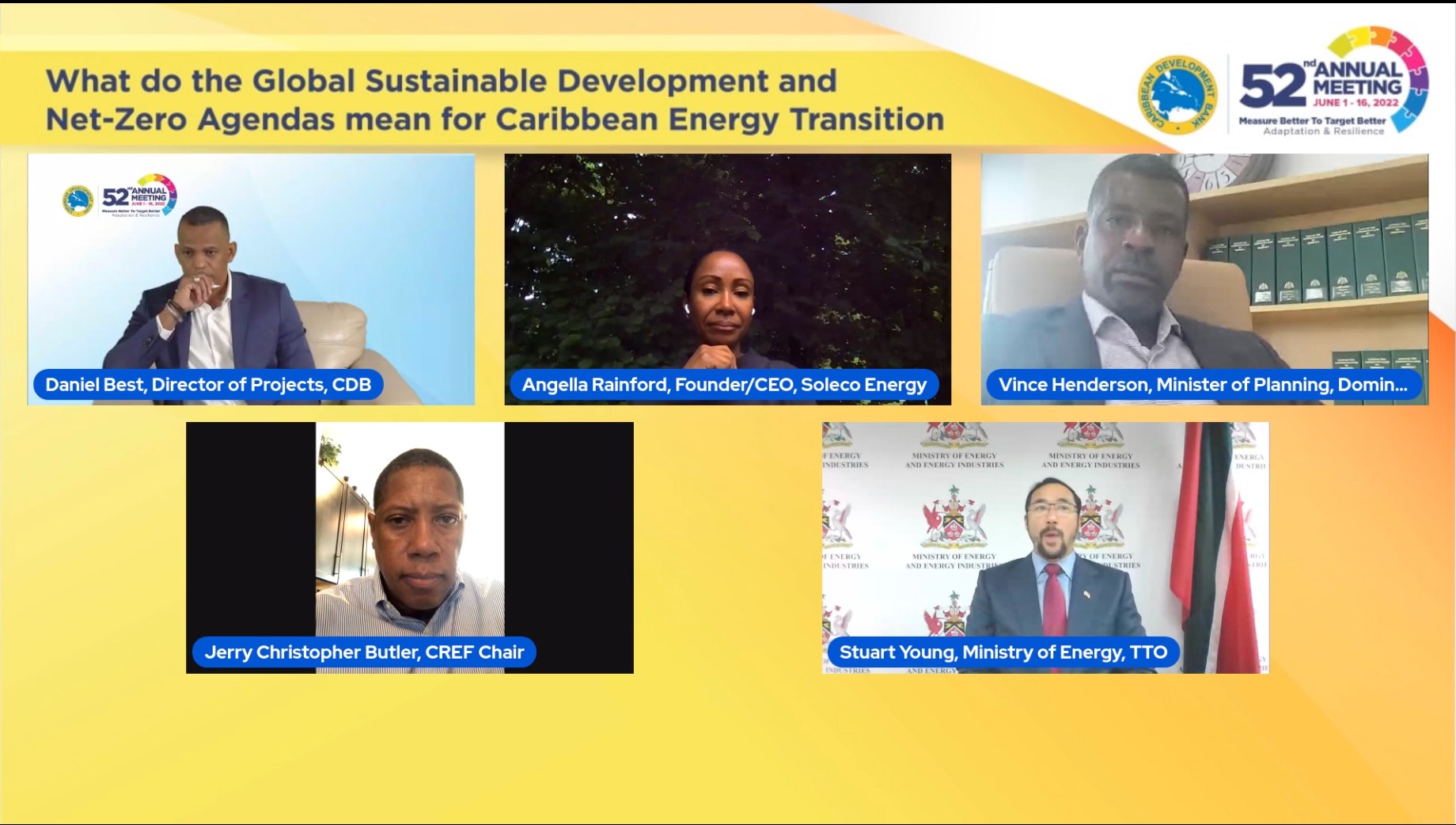 That is what is needed to accelerate the renewable energy (RE) transition in the Caribbean, asserted high level energy industry stakeholders from both the public and private sectors during a sustainable energy seminar held on Friday as part of the Caribbean Development Bank’s (CDB) 52nd Annual Meeting.

The seminar was entitled ‘What Do the Global Sustainable Development And Net-Zero Agendas Mean for the Caribbean’s Energy Transition’.

While the panel advanced differing views and recommendations on exactly how to do this, they agreed that with the small size of most Caribbean markets, financial feasibility must be the overriding concern.

“We are talking about small markets – let’s not kid ourselves. With a country like Dominica… our installed capacity is about 26 megawatts [and] since Hurricane Maria, our peak is about 15 megawatts,” stated Minister Dr Henderson in speaking about his country’s forays in RE particularly geothermal.

He noted that “no private partner is coming into this because they want to save the environment so much that it is the only thing that matters to them,” and added that as a policymaker, challenges have arisen in trying to bring on private sector partners who can facilitate renewable energy projects with an affordable end cost for local residents.

“They expect a return on that investment. So, what we’ve found out is that when the rubber hits the road, we get a few more bumps. The challenges that we’ve faced in the case of Dominica, we went to tender… in 2019 and the reality of the number that came to us was nothing close… as a matter of fact, twice what our consultants told us it would cost to do that project.”

CREF chairman Butler contended that there is private sector interest and financing available but that to make it make sense for investors, governments in the Region need to step up and speed up.

“What we found at CREF this year was that there was a huge amount of funding available – both grant funding and technical funding and in terms of private sector funding.

Because of that situation, where there is money now available to fund deals, the real question we found at this year’s CREF [was] what seems to be the missing element over a period of time? [There] is exactly just one point – analysis paralysis… Almost every last one of my CREF stakeholders have told me that the governments in the Caribbean are too slow, too reticent, they take too much time to get things done from one cabinet meeting to the other and just as they are about to get things done, they go to the population and there’s a vote and the government changes,” said Butler.

Speaking from the perspective of the private sector, Rainford asserted that both government and investors must start from a position of “where is the money going to come from to pay back all of this investment?”

She recommended looking to cost sharing and export for the kinds of RE projects that require high initial investments such as geothermal, saying:

“You’ve told me your peak is 26 MW… [for] a geothermal investment… there is no way that by basic math that it would make sense if it’s just for you. Clearly you would have to look for other groups. I wouldn’t invest unless I had an agreement from the other groups that they were going to purchase that power and what price they were going to purchase.”

On the question of how to make high initial investment costs feasible in small countries with relatively low levels of energy consumption, Minister Young raised the point of grant funding and how it could and should be used.

“You see the grant funding, don’t just dismiss it into feasibility studies and how to get your policies right and your regulations.

No, it can’t just be that because to make the metrics work for the people in these islands you need an element that covers … what will reduce the margins. So, if you [could] actually get the grant funding as a percentage of the capital cost of the project, that is how it should be applied in my view because it makes the project bankable to the private sector because it has reduced the overall cost and you’re dealing with very different metrics,” he stated.

He advanced a role for CDB as a “clearing house” to channel investment into the sector in the Region.

“Whilst we accept every territory has a different risk profile, different circumstances and even terrain… I want to promote CDB because we need to simplify it and we need to derive as governments, economies of scale that could benefit each of our territories. And I am looking for a champion that can do that. CDB must be able to know each individual territory, these are the laws and regulations applied. [So] now rather than [investors] running to each country– no, go to CDB and CDB will become our champion and pull us in.”