Remarks at Regional Stakeholders Consultation on the CSME 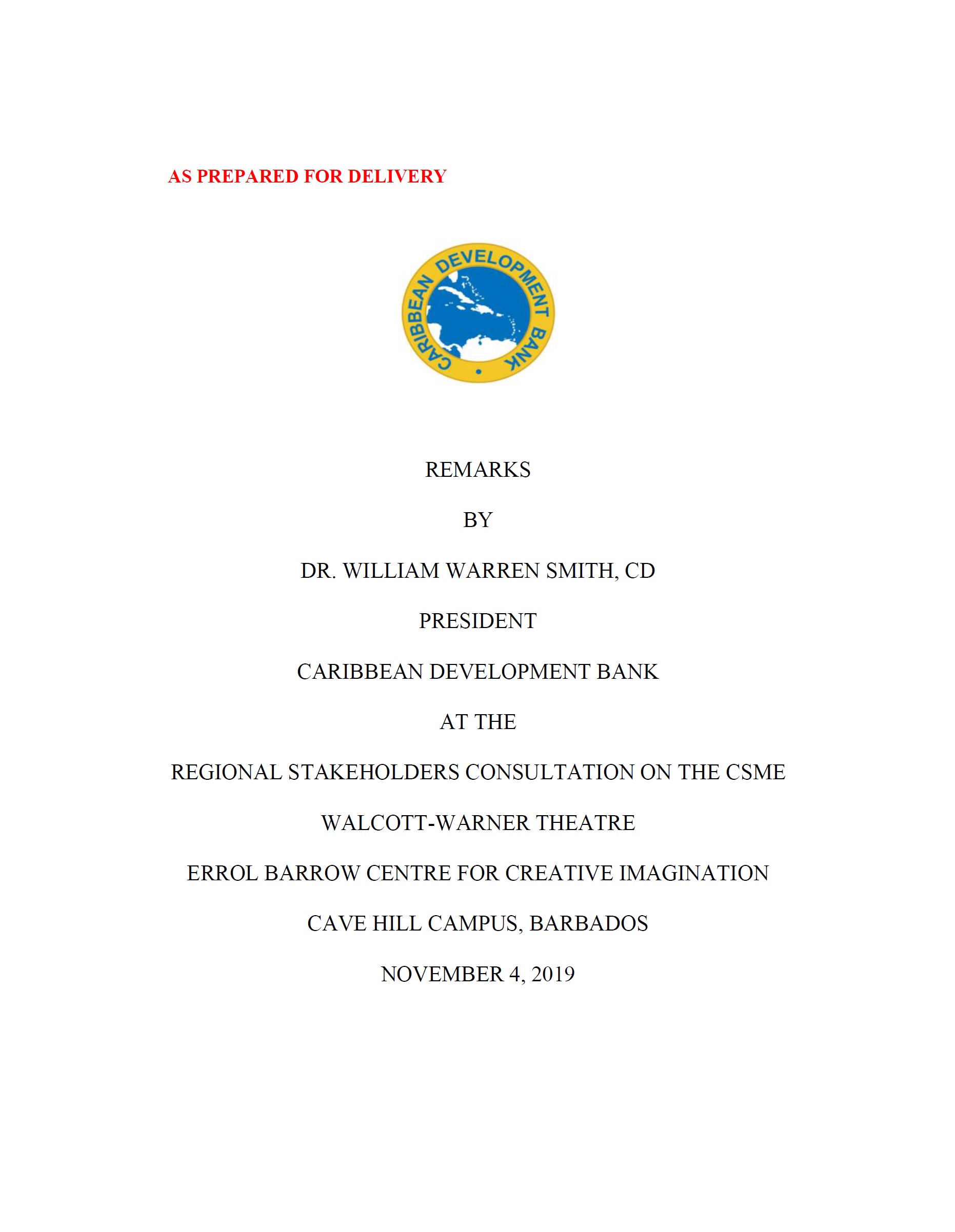 Last year, while attending your first Intercessional Heads of Government Meeting as Prime Minister, you declared your Government’s unequivocal commitment to the regional integration cause and Barbados’ readiness to play a full and active part in moving the process forward.

I make bold to say that you have been relentless in your quest; and over the last twelve months, you have injected a new energy in the movement towards the CARICOM Single Market and Economy (CSME).

Colleagues, the architects of our regional experiment envisaged a Caribbean Community working as a unified and collective grouping to promote economic integration and cooperation among its members, so that the benefits of integration could be equitably shared. They also foresaw our Region becoming a more competitive force in the global arena by pooling resources so that we could take greater advantage of opportunities that would normally be inaccessible to small nations operating separately.

The CSME was, therefore, conceptualised to create a larger marketplace, thereby augmenting economies of scale, and ultimately melding these small nations into a competitive force in the global arena. Even as we ask the question “What’s in it for me”, we must remember that for us to realise our full potential, our focus has to be on a regional approach that will enable Caribbean economies to become more competitive and viable on the global stage.

“We the People, recognise that we have responsibilities as well as rights; that our destinies are bound together; that a freedom which only asks “what’s in it for me”, a freedom without a commitment to others, a freedom without love or charity or duty or patriotism, is unworthy of our founding ideals, and those who died in their defense.”

So, as we engage in this discourse this evening, let us also seize the opportunity to generate new ideas that can make the CSME a living reality for our citizenry. What, therefore, is the imperative that should be driving us in this direction?

In addition to our commitment to pursue a regional approach to our socioeconomic development, CARICOM countries have each subscribed to the Sustainable Development Agenda. The appeal of this agenda is the promise to end poverty; to achieve a level of human development that is fair and inclusive; and to make possible a sustainable future for all our people by 2030.

Ladies and gentlemen, we are a decade away from that milestone. The imperative for the Caribbean Community is very clear. The successful completion of the Agenda within the timeframe demands that every CARICOM country embarks on an accelerated process of economic transformation; and our focus must be on becoming an internationally competitive trading bloc. There is an urgency, therefore, for us to accelerate the regional integration movement through the completion of the single market.

That urgency is underscored by the worrisome shift towards inward-looking policies and a retreat from multilateralism and globalisation in some parts of Europe and in the United States of America, which are traditional trading partners of CARICOM.

We at the CDB are convinced that CSME is our best bet for unlocking the economic growth potential of CARICOM countries and enhancing the prospects for greater prosperity for our people.

We would do well to take heed of Benjamin Franklin’s injunction that “[w]e must, indeed, all hang together or, most assuredly, we shall all hang separately”.

CDB, IDB sign US$50 million loan for COVID-19 response in the OECS
CDB Approves Grant to Enhance Remote Learning for UWI Students
“Stronger Together” campaign to highlight importance of psychosocial support during times of stress and crisis