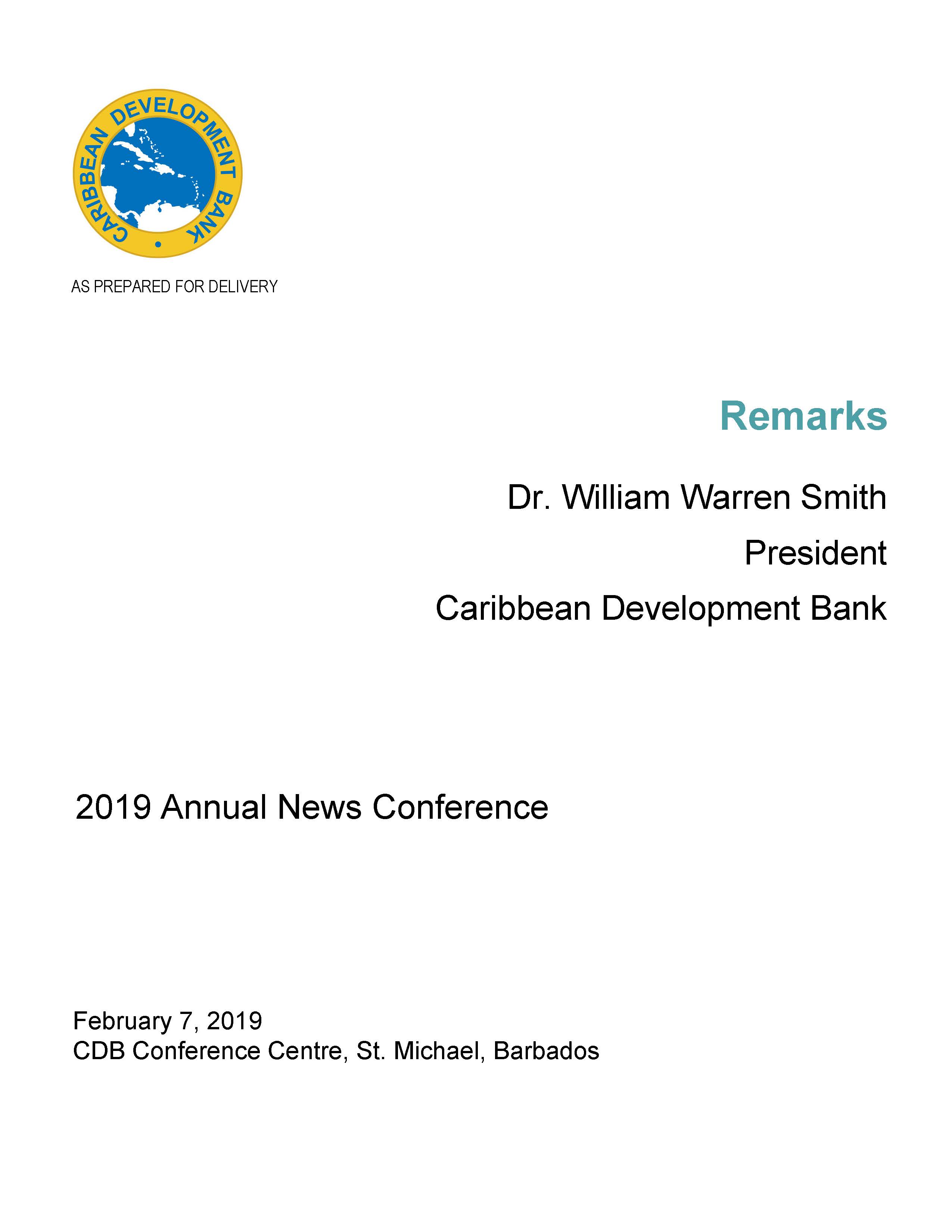 Good morning all and thank you for coming to the Annual News Conference of the Caribbean Development Bank (CDB).

This morning’s News Conference will consist of three presentations.

I will “get things rolling” by  offering some very general observations about regional socio-economic performance and prospects,  taking into account the impact of global developments in 2018.

I will also share information with you concerning  CDB’s performance and the support we provided to our  Borrowing Member Countries (BMCs) during the past year.

Our Director of Economics, Dr. Justin Ram, and our Director of Projects,
Mr. Daniel Best,  will do a “deeper dive” and provide you with:

The current international economic environment is characterised by escalating trade tensions, volatile commodity markets, and policy uncertainty with respect to both BREXIT and U.S. trade.

Taking these concerns into consideration, global economic growth is estimated to have been 3.7%  in 2018.

In the case of Grenada, its strong performance continued a five-year positive trend that averages around 5%. For Antigua and Barbuda and some of the other BMCs that were affected by the 2017 hurricane season, reconstruction efforts contributed to their upturn.

Conversely, real GDP contracted in Barbados despite modest gains in tourism, one of its key sectors. This contraction was attributed to the impact of fiscal consolidation and the fall in construction activity.

Anguilla’s economy also declined, due to an almost 40% fall-off in visitor arrivals, following hurricane damage to the hotel stock in 2017.

For the same reason, the Virgin Islands experienced a 50% decline in visitor arrivals.  Nevertheless, real GDP grew by over 2% as a result of buoyant business and financial services activity.

Most other BMCs welcomed growth in visitor arrivals.   According to the Caribbean Tourism Organization visitor arrivals increased by 15% in Belize, and by about 10% in the Cayman Islands and in Grenada.

Turning now to  the commodity exporting countries, higher oil production and prices drove higher growth in Suriname and in Trinidad and Tobago.  Buoyant gold prices also benefited  Suriname, although there was little change in actual production.

Growth in Guyana was linked mainly  to robust construction activity, in advance of the first commercial production of oil in 2020.

Fiscal performance varied across the Region.

Debt as a share of GDP decreased in 13 BMCs, although for at least half of our BMCs, the ratio continued to exceed the international benchmark of 60%.

Public finances  in some  BMCs continued to be affected following the 2017 hurricanes.

In Anguilla, tax revenues fell, while expenditure, much of it related to recovery, rose.  In Antigua and Barbuda, rising public expenditure was accompanied by lower non-tax revenues, especially from the Citizenship by Investment (CBI) programme.

Indeed, it was only in St. Kitts and Nevis that CBI revenues rose, following the launch of a new fund in late 2017.

For Grenada, the fiscal position continued to improve, thanks to strengthened expenditure management and  tax compliance.  Sustained economic growth contributed to better fiscal performance in Suriname and in Trinidad and Tobago.

As part of the first stage of recovery in Barbados, debt restructuring and fiscal restraint helped to achieve an increased primary surplus.

Belize also recorded a primary surplus, attributable to revenue enhancement measures taken as it sought to meet the requirements of its 2017 debt restructuring programme.

Despite projections of deceleration in global economic activity, the 2019 economic outlook for our BMCs is positive. CDB is projecting that real GDP growth will be around 2%, as construction, tourism, and the extractive industries, such as gold and oil, are expected to expand.

To sustain these gains over the medium term, BMCs will need to step up their efforts to build long-term resilience and tackle at least three challenges head-on:

So what has CDB been doing to support its BMCs?

In 2018, CDB supported countries in building climate and economic resilience.

We directed considerable resources towards countries seeking to build back better. The Bank  provided financing to the Virgin Islands (US$50 million) and Anguilla (US$14.9 million).

The Bank also signed an agreement with the Green Climate Fund (GCF), opening the door for more climate finance projects in the Region. This Agreement is catalysing our efforts to mobilise much-needed low-cost funding to build climate resilience in our BMCs.

Additionally, the Government of Canada approached CDB to establish and administer the Dominica Disaster Recovery and Resilience Fund. The grant funding will enhance post-disaster response, build more climate-resilient schools and empower communities across the country.

These new resources will also cover the Government’s premiums for parametric risk insurance for 2018 and 2019 under CCRIF SPC, formerly known as the Caribbean Catastrophe Risk Insurance Facility.

We cannot speak about climate resilience without mentioning energy security – an  important element of CDB’s strategy to support its BMCs’ economic transformation.

In 2018, we stepped up financing for energy-efficient street-lighting initiatives. The demand for these is increasing as countries seek to address high energy bills and citizen insecurity, and to meet their commitments to accelerating the rate of improvement in energy efficiency.

Last year, The Bahamas became the sixth BMC to benefit from the Bank’s financing of energy-efficient street lighting projects, with a loan of US$14.5 million, more than half of which was provided through the European Investment Bank’s Climate Action Line of Credit.

In partnership with the Inter-American Development Bank, CDB mobilised more than US$85 million for geothermal development in five Eastern Caribbean countries.

This funding expanded the pool of existing resources under the Sustainable Energy Facility, with US$80 million coming from GCF and US$5.6 million from the Government of the Republic of Italy.

The funds will go towards financing pre-feasibility studies and the often cost-intensive and riskier stages of development, including, exploration drilling, and field and plant development. Beneficiaries of the additional financing are Dominica, Grenada, St. Kitts and Nevis, Saint Lucia, and St. Vincent and the Grenadines.

Far too many Caribbean countries are still grappling with the challenges of fiscal deficits and high public debt, both of which stymie economic growth and hinder transformation and sustainability.

Therefore, in 2018 we supported the Government of Barbados’ efforts to address these challenges through the Barbados Economic Recovery and Transformation (BERT) programme.

In response to the Government’s request, CDB provided  a loan of US$75 million to facilitate fiscal sustainability, economic growth and social protection.

We will further support BERT with more policy-based funding over each of the next three years.  Our Director of Economics will give further details on this when I have completed my remarks.

However, there have been some good-news stories in our Region.

It should be noted that countries such as Grenada, Jamaica, and St. Kitts and Nevis have been reaping the benefits of their home-grown economic reform programmes, which have led to consecutive real GDP growth, fiscal surpluses, and declining debt-to-GDP ratios over the last five years.

Youth unemployment continues to be a challenge for Caribbean policymakers. The International Labour Organisation estimates that one in every four young persons is not able to find work.

This persistent trend belies the great strides that have been made in increasing education investments in the last decade.

However, targeted policy interventions and community engagement have helped to reduce unemployment in many BMCs.

In Jamaica, for example, unemployment fell to an all-time low of 8.4% in July 2018, as a result of improvements in the doing business environment and in macro-economic stability.

There were more jobs for young men and women in the business process outsourcing and construction sectors.  Other countries reporting declines in overall unemployment include The Bahamas, Cayman Islands, Grenada, and Suriname.

How do we achieve this?

By targeting our funding at projects that are designed specifically to address the critical social issues associated with high unemployment, income inequality and citizen insecurity!

We and our member countries recognise that it is the private sector which has to increasingly take a lead role in creating opportunities for growth.

More importantly, in the context of our Region, that private sector will be largely micro, small and medium-sized enterprises.

To that end, we are creating financing instruments that target MSMEs.

In a few minutes, our Director of Projects will share with you in detail some of the social interventions CDB made in 2018.

Allow me, however, to highlight one initiative with small beginnings and big potential.

In 2018, we, at CDB, launched the Cultural and Creative Industries Innovation Fund (CIIF), which was seeded with start-up capital of US$2.6 million from CDB’s own resources.

We envisage the rapid expansion of the CIIF into a major source of funding for the sector.

We designed it to be a multi-donor Fund and our ambition is for it to develop as a platform for supporting innovation; for driving sustainable growth; and for increasing  employment opportunities,  especially for our young people.

It is clear that the challenges our countries face are increasingly complex. This will require change and transformation - internally at CDB, and in our BMCs, but also at the regional level.

We have begun to adapt and to wring the changes;  and we are  maintaining this momentum.

As our institution approaches its 50th anniversary year, digital transformation and innovation have risen to the top of our agenda.

This means leveraging technology to deliver higher-quality service and greater value to our members and partners.

It is important that CDB remains the development partner that Caribbean Governments turn to first for solutions—whether they be funding, advice or  technical assistance.

And  digital transformation will help  us to maintain  our position as the devopment partner of choice for our Caribbean countries.

Now what is the shape of the transformation which we envisage for our BMCs?

The transformation process is one which will enable success on the road to becoming resilient Caribbean societies.

How will we get there?

We will need to be disciplined in ensuring we have sound governance structures and systems in place.

These will be evidenced by strong institutions with the capacity to build economic resilience, end extreme poverty, reduce debt to manageable levels, and achieve fiscal sustainability.

It is to the realisation of these hortatory goals that our BMCs and CDB must commit.

In examining the path to regional transformation, I am reminded of the tenets of this Bank. That is, to support the development of each of our BMCs, giving special attention to the lesser developed countries.

We have tried to stay true to this, and remain focused and resolute in our vision.

In short, CDB will do all we can to ensure that no BMC is left behind.

Let me now invite Dr.  Ram to make his presentation.