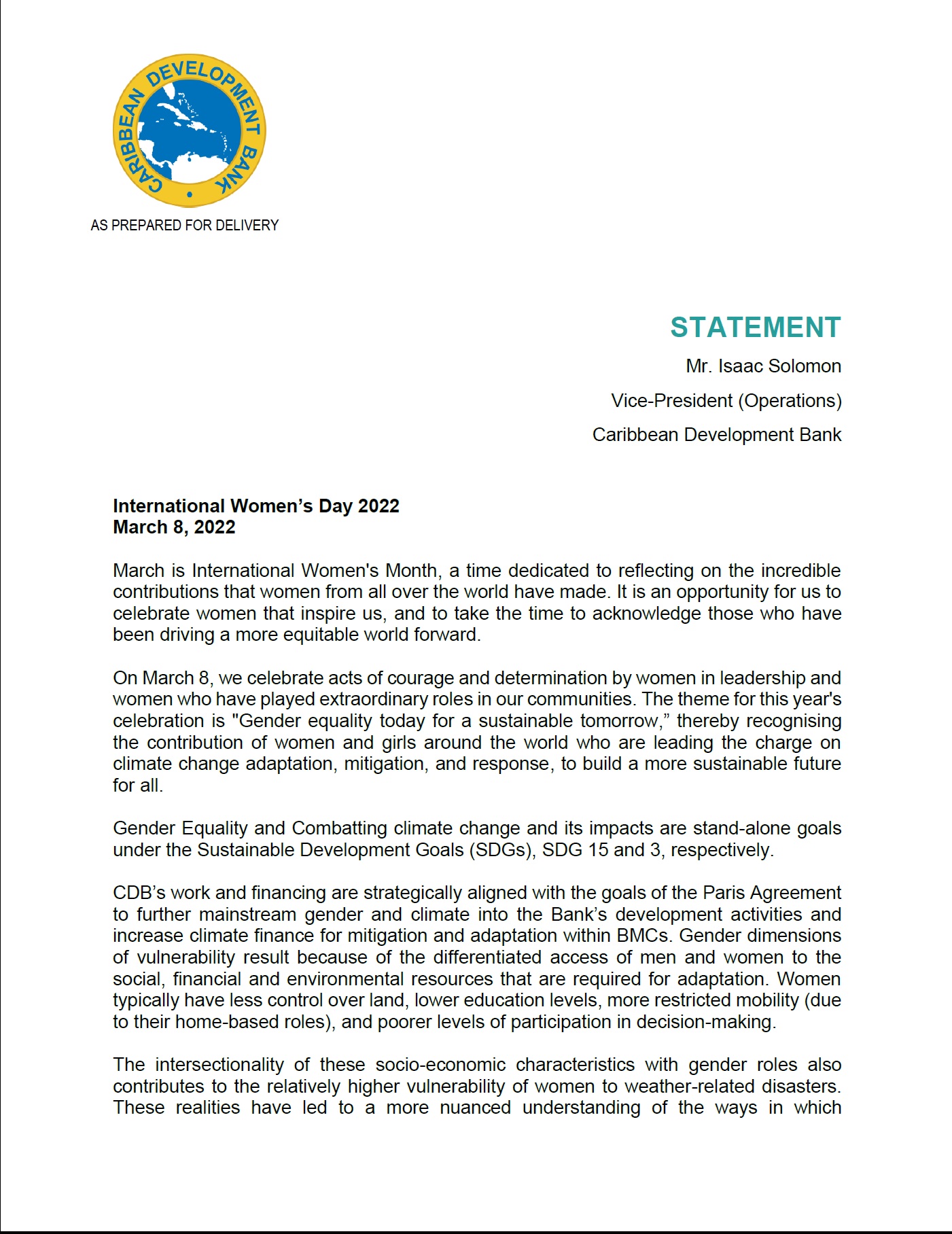 March is International Women's Month, a time dedicated to reflecting on the incredible contributions that women from all over the world have made. It is an opportunity for us to celebrate women that inspire us, and to take the time to acknowledge those who have been driving a more equitable world forward.

On March 8, we celebrate acts of courage and determination by women in leadership and women who have played extraordinary roles in our communities. The theme for this year's celebration is "Gender equality today for a sustainable tomorrow,” thereby recognising the contribution of women and girls around the world who are leading the charge on climate change adaptation, mitigation, and response, to build a more sustainable future for all.

Gender Equality and Combatting climate change and its impacts are stand-alone goals under the Sustainable Development Goals (SDGs), SDG 15 and 3, respectively.

CDB’s work and financing are strategically aligned with the goals of the Paris Agreement to further mainstream gender and climate into the Bank’s development activities and increase climate finance for mitigation and adaptation within BMCs. Gender dimensions of vulnerability result because of the differentiated access of men and women to the social, financial and environmental resources that are required for adaptation. Women typically have less control over land, lower education levels, more restricted mobility (due to their home-based roles), and poorer levels of participation in decision-making.

The intersectionality of these socio-economic characteristics with gender roles also contributes to the relatively higher vulnerability of women to weather-related disasters.  These realities have led to a more nuanced understanding of the ways in which vulnerability (and impacts and adaptation) are differentiated by gender – and recognition that women and other vulnerable groups are not homogeneous.

Unpacking these differences is essential to identify context-specific differences in vulnerability, and thus ensure that attempts at adaptation and mitigation are gender-responsive and in particular, redress gender inequalities in access to technology and climate finance.

Adaptation action should follow a country-driven, gender-responsive, participatory, and fully transparent approach. Such action should consider vulnerable groups, communities and ecosystems, and be guided by the best available science and, as appropriate, knowledge of indigenous peoples and local knowledge systems, with a view to integrating adaptation into relevant socioeconomic and environmental policies and actions.

When appropriately empowered as agents of change, vulnerable groups can play a key role in adaptation and mitigation activities and, at the same time, reduce their situation of inequality.

Examples of CDB Projects that are Gender Responsive include:

CDB is committed to working with countries and development partners to deepen the gender-related work that is undertaken in the context of broader climate change programme/project design. CDB intends to scale-up flows of concessional climate finance that contribute to promoting gender equality and reducing disparities in climate change vulnerability that are rooted in gender dynamics.

At CDB we have amazing women surrounding us from board members to staff. We also have the unique opportunity to connect with local women leaders in our BMCs and see firsthand how fiercely they advocate for resilience-building within their communities.

On behalf of the Caribbean Development Bank, I join the global community in honouring women's invaluable contributions to climate change adaptation, mitigation and responses of their communities and countries within our Caribbean Region.

Happy International Women's Day! Your commitment to the development of the Caribbean over our 50 years of operations has not gone unnoticed. We salute you!